“If I had ever learnt, I should have been a great proficient.” Lady Catherine de Bourgh has many great lines in Pride and Prejudice, and this line (in Volume 2, Chapter 8) is one of my favourites. It’s debatable whether 10,000 hours of practice will make you an expert, but it’s true that no one becomes “a great proficient” without making an attempt to learn a particular skill.

Lady Catherine admits she isn’t a musician, yet she claims to be an expert in appreciating music: “There are few people in England, I suppose, who have more true enjoyment of music than myself, or a better natural taste.” She is confident about her skill in dispensing advice, a skill she has practised for a long time, and she tells Mr. Darcy to pass on her advice to his sister Georgiana about her music: “pray tell her from me, that she cannot expect to excel, if she does not practise a great deal.” Ignoring her nephew’s assurance that Georgiana “does not need such advice” because “She practises very constantly,” Lady Catherine insists, “when I next write to her, I shall charge her not to neglect it on any account.” Her opinion is that “It cannot be done too much.” 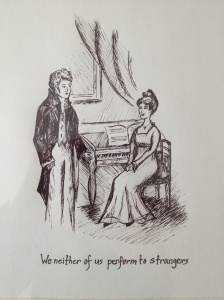 “We neither of us perform to strangers.” Illustration by Elizabeth Baxter

I’ve written before about the way Darcy takes Elizabeth’s advice to practise talking with strangers, and works hard to show her he’s capable of talking with the Gardiners at Pemberley. This earlier scene at Rosings is fascinating because it shows how Elizabeth’s advice to him is influenced by Lady Catherine’s advice to her. Lady Catherine says, “I often tell young ladies, that no excellence in music is to be acquired, without constant practice. I have told Miss Bennet several times, that she will never play really well, unless she practises more.” Later in the evening, Elizabeth passes on the advice. She says she is not an expert at playing the piano, and effectively tells Darcy that if she had practised more, she “should have been a great proficient.” She acknowledges it is her “own fault—because I would not take the trouble of practising,” and implies that he ought to practise the art of conversation. She doesn’t seem to have any intention of taking Lady Catherine’s advice herself—at least, not with music.

Darcy defends himself by saying he lacks this specific “talent,” “of conversing easily with those I have never seen before.” Elizabeth suggests it isn’t a matter of talent, it’s a matter of spending time and effort practising. Then at the end of the chapter, Lady Catherine adds her advice that in addition to practising, what Elizabeth needs is the benefit of studying music with “a London master.” It’s comical that she insists her daughter Anne’s musical taste, like her own, is superior to Elizabeth’s, even though neither she nor Anne has ever practised or studied music, with or without a “master.”

If you put all her advice together, Lady Catherine would sound quite sensible: to be an expert, one needs “true enjoyment,” “natural taste,” constant practice, and good teachers. But it’s much more entertaining to listen to the contradictions inherent in her attitude toward music and its practitioners. And to watch Elizabeth catch her criticism and throw it at Darcy.

My page Pride and Prejudice at 200 collects all the posts in this series on rereading the novel, along with links to other essays and articles on P&P.

6 thoughts on “How to Become an Expert, by Lady Catherine de Bourgh”