Jane Austen was born 238 years ago today, on December 16, 1775. Claire Tomalin imagines what must have been happening at Steventon in the first days after the birth: “Inside the parsonage, Mrs. Austen lay upstairs in the four-poster, warmly bundled under her feather-beds, the baby in her cradle beside her, while someone else—very likely her sister-in-law Philadelphia Hancock—supervised the household, all the cleaning and cooking necessary where there were many small children, together with the extra washing for the newly delivered mother.” She says Mrs. Austen wouldn’t have left her bed for at least two weeks, and wouldn’t have left the house for at least a month. It was a cold, hard winter.

On December 7th, JASNA Nova Scotia enjoyed a lovely celebration of Austen’s birthday at The Cellar Bar and Grill in Halifax, with a record turnout of seventeen people. Christina told us about tours and talks at the 2013 JASNA AGM in Minneapolis, and Hugh gave an eloquent toast to Jane Austen, quoting a passage from a letter to Cassandra in November 1798 in which she talks, briefly, about her own feelings. Austen’s reflections, he said, “are full of her customary ironic humour, only in this instance it’s directed towards herself.”

The Cellar Bar and Grill

In the letter, she’s writing about Tom Lefroy (the “Irish friend” with whom she had danced and flirted in the past) and she says, “I was too proud to make any enquiries” 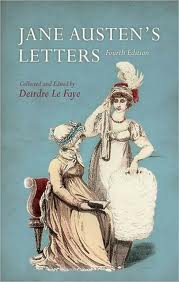 about him. “It will all go on exceedingly well, and decline away in a very reasonable manner. There seems no likelihood of his coming into Hampshire this Christmas, and it is therefore most probable that our indifference will soon be mutual, unless his regard, which appeared to spring from knowing nothing of me at first, is best supported by never seeing me.”

Hugh wonders what she thought of Tom Lefroy in his absence. “Was she disappointed or dissembling? Was her existence a life less for a love lost, or a literary life released by a love let go?” What do you think of this passage, dear readers? Does her humour conceal disappointment, or is she ready for “mutual indifference”? Can you think of other passages in the letters where she makes reference to her feelings?

The new issue of Persuasions On-Line is published today, including papers from the AGM in Minneapolis. This year’s celebration of 200 years of Pride and Prejudice continues. Pretty soon, however, it will be the Year of Fanny Price – 200 years since the publication of Mansfield Park – and JASNA members can look forward to the 2014 AGM: “Mansfield Park in Montréal: Contexts, Conventions & Controversies.”

I’m working on an exciting project that will celebrate Mansfield Park here on my blog. As with the 200th anniversary of Pride and Prejudice and the 100th anniversary of The Custom of the Country, I’m planning a series of posts that focus on the novel—but this

time, you’ll get to hear from several different writers talking about Mansfield Park. Please stay tuned for more information about the contributors to this new series!

Quotations from the letters are from the fourth edition of Jane Austen’s Letters, ed. Deirdre Le Faye (Oxford University Press, 2011). The passage about Jane Austen’s birth is from Jane Austen: A Life, by Claire Tomalin (Vintage, 1999).