I’m really excited about discussing Mansfield Park with all of you this year – so excited that I can’t wait until May 9th, when my series of guest posts on the novel launches, to start the conversation. I’m also far too impatient to begin at the beginning, so I’m writing today to tell you what I think of the ending. For anyone who hasn’t yet read Mansfield Park, here’s the obligatory spoiler alert. (Although I guess the title of this post already alluded to the ending….)

I think the key to understanding Mansfield Park is that it’s a tragedy, rather than a comedy. I mentioned a couple of weeks ago that not many people choose it as a favourite from among Austen’s novels. (Natasha Duquette, who’s writing a guest post on part of Chapter 27 – in which Fanny “had all the heroism of principle” – is an exception. Is there anyone else out there whose favourite Austen novel is Mansfield Park? I would love to hear from you! I’ve already confessed that Pride and Prejudice is my own favourite, although MP is a close second.) Many readers find the ending of Mansfield Park disappointing. I think that’s because most of us tend to approach Austen novels with the expectation that they will be romantic comedies. And most of them are. But not this one.

Reading Mansfield Park in light of Aristotle’s theory of tragedy in his Poetics shows that it’s a tragedy with a happy ending, or a “prosperous outcome.” I wrote about this idea in my essay “The Tragic Action of Mansfield Park” in Persuasions On-Line a few years ago.

The essay was based on a talk I gave at the 2006 JASNA AGM in Tucson, and over the last few years I revised it again, developing the argument further for publication in the MLA collection of essays Approaches to Teaching Austen’s Mansfield Park, edited by Marcia McClintock Folsom and John Wiltshire. That version of the essay will be published soon (the book is at the copyediting stage, so publication can’t be too far away – I hope!). [Edited to add: here’s the blog post I wrote in October 2014 when the book was published: Approaches to Teaching Austen’s Mansfield Park.]

But for now, if you’re interested in my argument, you can read the earlier version in Persuasions On-Line. This version includes comparisons between Mansfield Park and Edith Wharton’s novel The House of Mirth, and I was quite attached to those comparisons (as you can imagine, because I love talking about Austen and Wharton). I expanded the rest of the essay for the MLA volume, but I had to take Wharton out because of the focus on teaching Austen.

So here’s your chance to read the Austen and Wharton version: 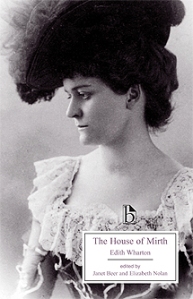 The House of Mirth, by Edith Wharton, edited by Janet Beer and Elizabeth Nolan

In October 1906, a dramatization of Edith Wharton’s novel The House of Mirth opened in New York at the Savoy Theater. It was not a success, even though the novel had been very well-received the year before.  The ending of The House of Mirth is melancholy: the beautiful heroine dies alone in a dreary New York boarding house, either by suicide or an accidental overdose of chloral, after a painful decline in her social and financial position and her marriage prospects. Like Fanny Price or Elizabeth Bennet, she has refused to marry a man she cannot love; unlike Elinor Dashwood, who marries Edward Ferrars on a small clerical income, Wharton’s heroine does not think she could ever be comfortable married to the man she does love, because he does not have enough money to support the life of luxury she craves. Edith Wharton later reflected on the judgment of her friend William Dean Howells, who, she said, commented to her after the performance that “[w]hat the American public always wants is a tragedy with a happy ending.”

Click here to read the rest of the essay in Persuasions On-Line.

25 thoughts on “Mansfield Park is a Tragedy, Not a Comedy”