JASNA Nova Scotia members are meeting on Sunday, February 23rd in Halifax to discuss essays published in the most recent issue of Persuasions On-Line, which includes conference papers on Pride and Prejudice from the 2013 AGM in Minneapolis. The celebrations for Mansfield Park have begun, and the celebrations for Pride and Prejudice aren’t over yet!

Our plan is for each person to choose an essay to focus on. We’ll take turns giving a brief overview (maximum 5 minutes each) of the essays we’ve chosen, with discussion to follow. Sheila and Hugh Kindred are hosting the event. Please let them know if you’re able to attend, and which essay you’d like to talk about. (Or leave a comment here, and I’ll pass on the information to them, and directions to you, as needed.)

Today, January 28th, marks the 201st anniversary of the day Pride and Prejudice was published. Here’s what I wrote last year to celebrate the 200th anniversary, in my post “Jane Austen’s ‘Darling Child’ Meets the World”:

Jane Austen didn’t like the way her mother read Pride and Prejudice aloud. Mrs. Austen read too quickly, “—& tho’ she perfectly understands the Characters herself, she cannot speak as they ought” (Letters, 4 February 1813). Jane writes to her sister Cassandra that she’s grateful for Cassandra’s praise of the novel because she has been having “some fits of disgust” recently. She is at home in Chawton without Cassandra, keeping the secret of her authorship from her neighbours and enduring the irritation of listening to her mother’s interpretation of her characters. She can’t control what other people do with the language of her characters, and she can’t control the errors in the printing: “The greatest blunder in the Printing that I have met with is in page 220—Vol. 3. where two speeches are made into one.” She’s just written one of the greatest books in English literature, and she must know she’s accomplished something very important, but the fact that the book is now out in the world being judged and interpreted by others is making her restless.

Click here to read the rest of “Jane Austen’s ‘Darling Child’ Meets the World.” (This piece was, and still is, the most popular post on my blog.) And here’s the link to the series of blog posts I wrote after that one, about the experience of rereading Pride and Prejudice. Happy 201st anniversary to Austen’s darling child! 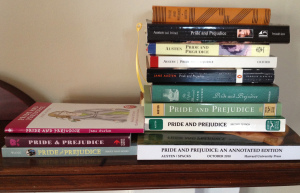 5 thoughts on “201 Years of Pride and Prejudice”