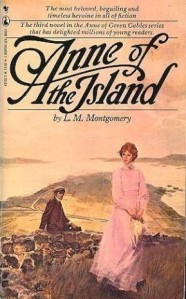 When Anne Shirley first arrives in Kingsport (Halifax), in L.M. Montgomery’s Anne of the Island, she’s told that her room looks out on “Old St. John’s Graveyard,” across the street from her boarding house. She says the view sounds “gruesome,” but her friend Priscilla makes the case for the graveyard as a romantic spot. Much has changed in Halifax in the century since L.M. Montgomery was a student at Dalhousie, but the Old Burying Ground has changed very little (thanks to the efforts of the Old Burying Ground Foundation). Here’s Priscilla’s description, at the end of Chapter Three:

Old St. John’s is a darling place. It’s been a graveyard so long that it’s ceased to be one and has become one of the sights of Kingsport. I was all through it yesterday for a pleasure exertion. There’s a big stone wall and a row of enormous trees all around it, and rows of trees all through it, and the queerest old tombstones, with the queerest and quaintest inscriptions. You’ll go there to study, Anne, see if you don’t. Of course, nobody is ever buried there now. But a few years ago they put up a beautiful monument to the memory of Nova Scotian soldiers who fell in the Crimean War. It is just opposite the entrance gates and there’s ‘scope for imagination’ in it, as you used to say.

Later that evening in her room, Anne looks out to the quiet street: “Across it the moon was shining above the trees in Old St. John’s, and just behind the great dark head of the lion on the monument.” The narrator tells us that “Every citizen of Kingsport feels a thrill of possessive pride in Old St. John’s, for, if he be of any pretensions at all, he has an ancestor buried there, with a queer, crooked slab at his head, or else sprawling protectively over the grave, on which all the main facts of his history are recorded.”

Anne and Priscilla explore the cemetery, taking turns reading inscriptions on the tombstones. Just as Montgomery found comfort in her walks through Halifax’s Point Pleasant Park when she was homesick for Prince Edward Island, Anne finds comfort when she communes with nature in Old St. John’s: “I don’t know that a graveyard is a very good place to go to get cheered up, but it seems the only get-at-able place where there are trees, and trees I must have. I’ll sit on one of those old slabs and shut my eyes and imagine I’m in the Avonlea woods.” 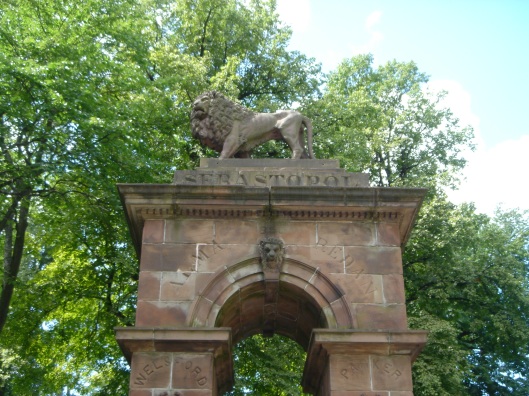 The Welsford-Parker Monument. I decided to dig out some old photos taken in summer, instead of taking more pictures of Halifax in the snow. Yes, it is STILL snowing here…. No signs of spring.

The Welsford-Parker Monument was erected in 1860 as a memorial to Major Augustus Welsford of the 97th Regiment and Captain William Parker of the 77th Regiment, who died at Sebastopol on September 8, 1855. The arch and lion were carved from New Brunswick sandstone by George Laing.

Major-General Robert Ross, who commanded the British troops who set fire to Washington and the president’s mansion in 1814, is buried in the cemetery. Captain James Lawrence of the defeated U.S.S. Chesapeake died in the battle with H.M.S. Shannon in 1813 and was buried here, but was later reburied in Trinity Churchyard, New York. Anne imagines the day the Shannon sailed into “Kingsport Harbor”:

The old graveyard, with its overarching trees and long aisles of shadows, faded from her sight. Instead, she saw the Kingsport Harbor of nearly a century agone. Out of the mist came slowly a great frigate, brilliant with ‘the meteor flag of England.’ Behind her was another, with a still, heroic form, wrapped in his own starry flag, lying on the quarter deck – the gallant Lawrence. Time’s finger had turned back his pages, and that was the Shannon sailing triumphant up the bay with the Chesapeake as her prize.

‘I’ve always loved that old story,’ [Anne] said, ‘and although the English won that victory, I think it was because of the brave, defeated commander I love it.’

The graveyard closed in 1844, and it was not until the 1980s that restoration work began. A second major restoration has been underway in recent years, and the Old Burying Ground Foundation is grateful for any donations.

You can also read more about the Old Burying Ground in “L.M. Montgomery’s Halifax: The Real Life Inspiration for Anne of the Island,” by Sue Lange, in The Shining Scroll, the newsletter for the L.M. Montgomery Literary Society.

And you can read more about both the Old Burying Ground and St. Paul’s Church in my book St. Paul’s in the Grand Parade.

If you missed last week’s post on “Anne of Green Gables in Kingsport/Halifax,” you can find it here.

9 thoughts on “Anne of Green Gables and the Old Burying Ground, Halifax”