Sara Malton is Associate Professor of English at Saint Mary’s University in Halifax, Nova Scotia, where she specializes in nineteenth-century literature, especially the intersection of fiction, finance, and law. After receiving her Ph.D. from the University of Toronto in 2004, she went on to a Postdoctoral Fellowship at Cornell University and after that she joined Saint Mary’s in 2005. Sara and I first met at a conference when we were both in grad school, and we reconnected a few years ago, after I moved back to Halifax. We’ve had many conversations about Austen, Dickens, Gaskell, and other nineteenth-century writers, and about our own writing projects, too. I’m very happy that she’s joining the Mansfield Park party on my blog with her guest post on memory.

Sara’s book, Forgery in Nineteenth-Century Literature and Culture: Fictions of Finance from Dickens to Wilde, was published by Palgrave in 2009. Her work has also appeared in such journals as Studies in the Novel, Victorian Literature and Culture, the European Romantic Review, and English Studies in Canada, and she’s currently working on a book on naval impressment and nineteenth-century culture. She’s a Trustee of the Dickens Society, and she’s going to host the Annual Dickens Society Symposium in Halifax in July 2015.

William had obtained a ten days’ leave of absence to be given to Northamptonshire, and was coming, the happiest of lieutenants, because the latest made, to shew his happiness and describe his uniform.

He came; and he would have been delighted to shew his uniform there too, had not cruel custom prohibited its appearance except on duty. So the uniform remained at Portsmouth, and Edmund conjectured that before Fanny had any chance of seeing it, all its own freshness and all the freshness of its wearer’s feelings must be worn away. It would be sunk into a badge of disgrace; for what can be more unbecoming, or more worthless, than the uniform of a lieutenant, who has been a lieutenant a year or two, and sees others made commanders before him? So reasoned Edmund, till his father made him the confidant of a scheme which placed Fanny’s chance of seeing the 2d lieutenant of H.M.S. Thrush, in all his glory, in another light.

This scheme was that she should accompany her brother back to Portsmouth, and spend a little time with her own family. It had occurred to Sir Thomas, in one of his dignified musings, as a right and desirable measure; but before he absolutely made up his mind, he consulted his son. Edmund considered it every way, and saw nothing but what was right. The thing was good in itself, and could not be done at a better time; and he had no doubt of it being highly agreeable to Fanny. This was enough to determine Sir Thomas; and a decisive “then so it shall be” closed that stage of the business; Sir Thomas retiring from it with some feelings of satisfaction, and views of good over and above what he had communicated to his son; for his prime motive in sending her away had very little to do with the propriety of her seeing her parents again, and nothing at all with any idea of making her happy. He certainly wished her to go willingly, but he as certainly wished her to be heartily sick of home before her visit ended; and that a little abstinence from the elegancies and luxuries of Mansfield Park would bring her mind into a sober state, and incline her to a juster estimate of the value of that home of greater permanence, and equal comfort, of which she had the offer.

It was a medicinal project upon his niece’s understanding, which he must consider as at present diseased. A residence of eight or nine years in the abode of wealth and plenty had a little disordered her powers of comparing and judging. Her father’s house would, in all probability, teach her the value of a good income; and he trusted that she would be the wiser and happier woman, all her life, for the experiment he had devised. 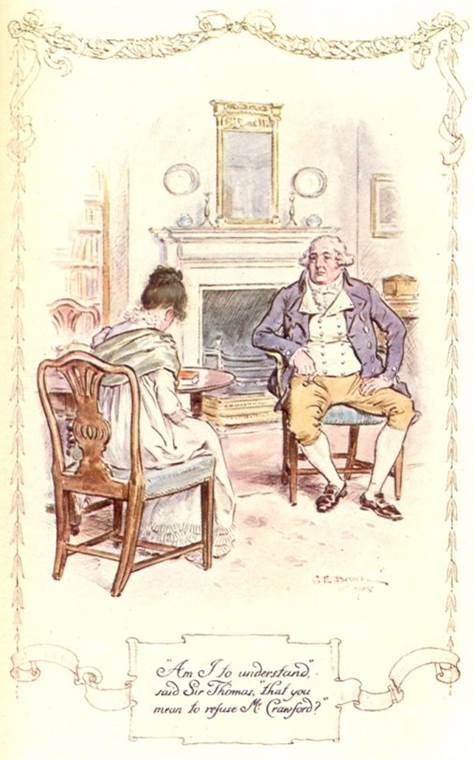 “‘Am I to understand,’ said Sir Thomas, ‘that you wish to refuse Mr. Crawford?’” Illustration by C. E. Brock. (http://mollands.net/etexts/images/mpillus/mpbrockwc19.jpg)

The desire for Mansfield that Sir Thomas wishes to induce in Fanny renders him in many ways a forebear of later nineteenth-century novelists: with some assistance from Edmund, he essentially becomes the author of the whole piece, and the strategies involved in his “medicinal project” lead to the central character’s crucial confrontation with her origins. Over the course of the century, such a confrontation will come to shape the contours of the Victorian novel. Yet here, of course, the home that Sir Thomas desires Fanny to long for is not her originary one, but her adopted place.

Fanny’s “transplantation” (something also worth considering in relation to Sir Thomas’ connection to slavery) looks forward to the shifting notions of home, which will more thoroughly inform Austen’s next novel, Persuasion. There, when Anne Elliot first finds herself facing a removal from Kellynch Hall to her sister’s home, she finds that “it was highly incumbent on her to clothe her imagination, her memory, and all her ideas in as much of Uppercross as possible.” How we dress ourselves, our ideas, and our nation is indeed key here as well: it is, after all, the opportunity for Fanny to view her brother William in the uniform of a lieutenant that presents, to Sir Thomas’ delight, the occasion for her journey to Portsmouth. Persuasion also registers at length Austen’s interest in and connection to the naval realm; appropriately, then, Fanny’s most overt confrontation with the contingencies of memory and home takes place at Portsmouth and in the context of William’s promotion and imminent voyage.

“William was often called on by his uncle to be the talker.” Illustration by C. E. Brock. (http://mollands.net/etexts/images/mpillus/mpbrockwc14.jpg)

The flaws of Sir Thomas’ aims and method are underscored by the fact that in seeking a “cure” for Fanny’s “diseased” mind, he threatens her infection with yet another. The plots of Fanny and William converge again in this respect, for each is dispatched on a mission associated with similar effects on the psyche. The very “cure” that Sir Thomas imagines will convince Fanny to accept Henry Crawford’s proposal – homesickness – was in fact a disease of mind especially associated with the military man’s plight: in the eighteenth-century “nostalgia” was the medical term assigned to the illness brought on by the enforced removal from home, something typically experienced by the sailor or soldier while in service.

In the end, Sir Thomas’ plot is all the more successful given that Fanny finds at Portsmouth that she has been essentially forgotten. Her visit seems to pull her backward, into the realm of incivility and forgetfulness – a world, in short, of so much noise and so little thought. Yet it ultimately propels her forward, though not as Sir Thomas had anticipated: Fanny’s marriage to Edmund moves us away, however slightly, from a wholly traditional social model that insists upon the determinacy of home and origins. Instead, as William’s progress shows, inwardness may carry its own reward, and take us some way toward the real “cure” necessary for a nation of diseased morality, figured elsewhere by Henry and Mary Crawford on land and Admiral Crawford at sea.

To read more about all the posts in this series, visit An Invitation to Mansfield Park. Coming soon: guest posts by Margaret C. Sullivan, Amy Patterson, Theresa Kenney, and Karen Doornebos.