Janet Todd has recently retired after half a century of full-time teaching and administering mainly in Britain and America, and she has, she says, “turned with relief to reading and writing novels.” Lady Susan Plays the Game, an Austen spin-off, was published in 2013. Her first original fiction, A Man of Genius, set in Venice and Regency London, will be published in March by Bitter Lemon Press. I looked up some of the advance praise for the novel and found that Philippa Gregory calls A Man of Genius “Strange and haunting, a gothic novel with a modern consciousness.” Sounds irresistible, doesn’t it?

Janet is the author and editor of many books on Austen and other writers, including Jane Austen: Her Life, Her Times, Her Novels; The Cambridge Companion to Pride and Prejudice; and biographies of Mary Wollstonecraft and Aphra Behn. She is General Editor of the Cambridge Edition of the Works of Jane Austen. It’s my pleasure to introduce her guest post for Emma in the Snow, on “English verdure.”

A recent conference at Chawton House to honour Marilyn Butler reminded us all of her influential Jane Austen and the War of Ideas. Written 40 years ago, it placed Austen within her literary-political context, arguing for an ideologically conservative and patriotic author committed to the Anglican Tory values of her family. Since then it has provoked critics seeking to fit Austen into present orthodoxies, relieving her of possible taints of classism, sexism and racism. Also nationalism: the Englishness of Emma as she stands in the grounds of George Knightley’s ancient Donwell Abbey.

she viewed the respectable size and style of the building, its suitable, becoming characteristic situation, low and sheltered—its ample gardens stretching down to meadows washed by a stream, of which the Abbey, with all the old neglect of prospect, had scarcely a sight—and its abundance of timber in rows and avenues, which neither fashion nor extravagance had rooted up. … The house … was just what it ought to be, and it looked what it was.

It was hot; and … they insensibly followed one another to the delicious shade of a broad short avenue of limes, which stretching beyond the garden at an equal distance from the river, seemed the finish of the pleasure grounds.—It led to nothing; nothing but a view at the end over a low stone wall with high pillars, which seemed intended, in their erection, to give the appearance of an approach to the house, which never had been there.

She sees woods, slopes and

Abbey-Mill Farm, with meadows in front, and the river making a close and handsome curve around it.

It was a sweet view—sweet to the eye and the mind. English verdure, English culture, English comfort, seen under a sun bright, without being oppressive. (Volume 3, Chapter 6) 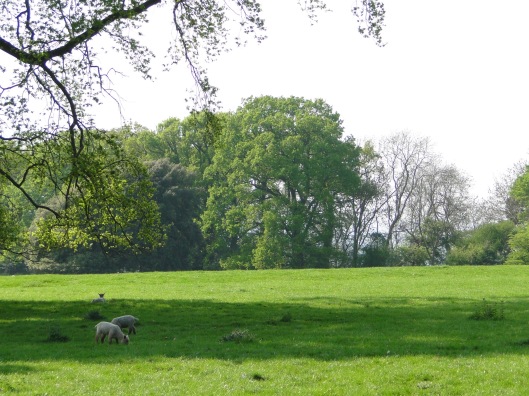 All moderation, ease, and balance—without the violent sun of southern countries. The grounds Emma contemplates are not formal, contrived and abstract, not planned in the way of French and British reformers of land, people or states, its avenues of old established lime trees, its views of a satisfying “nothing.”

It’s well that she likes it. In contrast not only to the cosmopolitan naval men of Persuasion and Mansfield Park, but also to Fanny Price and Anne Elliot, who experience different scenes and cultures, the wealthier, more privileged Emma is almost stationary, contained in her small community of Highbury. Though the most imaginative and dominant, she is the most controlled of the heroines. She’s almost imprisoned at home, where she pays for her significance by thraldom to a selfish, demanding and adoring father whom she pretty well infantilizes. The sense of claustrophobia is real—at the end as well as at the beginning. She has realised her love for Mr. Knightley in part through snobbish distaste at the horror of a Jane or Harriet as mistress of Donwell Abbey. When her father dies, she herself will be fixed there for life.

Nationalism was a conflicted notion in Austen’s time. Liberal thinkers of the 1790s yearned for an internationalism of spirit, comically vanquished here as George of England defeats Frank for an Emma—whom the latter never actually wanted. In the early 19th century national stories were all the rage, bardic tales of the “Celtic fringe”: Sydney Owenson’s Wild Irish Girl, many Irish and Welsh works of Maria Edgeworth, Iolo Morganwg, and Walter Scott. There was no equivalent for England.

Or was there in Austen’s Emma?

Cambridge in the snow (Janet’s photo)

In the other two novels begun in Chawton, Persuasion and Mansfield Park, the navy stands for the nation, defined through men employed to guard it. This nationalism is tied to growth in state administration: Anne Frey therefore sees a new bureaucratic identify for Britishness. This identity develops against the Englishness of the landed gentry, an aristocratic sense of place, ownership and evolving organic community. (See Anne Frey, “A Nation without Nationalism: the Reorganization of Feeling in Jane Austen’s Persuasion,” in Novel [March 2005].) If this is so, unlike the other two novels, Emma is about Englishness.

In which case, in its insistence on the value of small things and emphasis on “nothing” it may gently mock the fashionable fictions that made their nationalisms exotic, full and a little simplified. But it may also—just a little—ironise Emma and her provincial vision.

The Scottish philosopher David Hume had commented on parochial attitudes of English gentlemen: devoted to “domestic affairs” and everyday objects. Irish and Scottish nationalist writers of Austen’s time would have made poverty clearly part of a story and openly addressed the politics underpinning their vision. Just before her musing on England, Emma had complacently considered the established gentry family that owns the estate. But here, looking across Donwell grounds, she makes no class assumptions, not even registering the tenancy of Robert Martin whom she’d so despised as Harriet’s suitor. Her looking, though containing agriculture, is primarily aesthetic.

And she sees a pastoral England—just before she marries a magistrate and working farmer who will be helped by the capital she brings. Jane Fairfax, who knows a world beyond Highbury, leaves with the man who yearns for continental travel. Emma may well see the sea but fleetingly: she will live yoked physically to her father and socially to two women who irritate her: Miss Bates and Mrs. Elton. She will have to stay longer in the homes of the poor and put up with the irritation of adjacent lives in her patch of gentle “English verdure.”

Quotations are from the Cambridge edition of Emma, edited by Richard Cronin and Dorothy McMillan (2005).

Eleventh in a series of blog posts celebrating 200 years of Jane Austen’s Emma. To read more about all the posts in the series, visit Emma in the Snow. Coming soon: guest posts by Elisabeth Lenckos, Carol Chernega, and Cheryl Kinney. 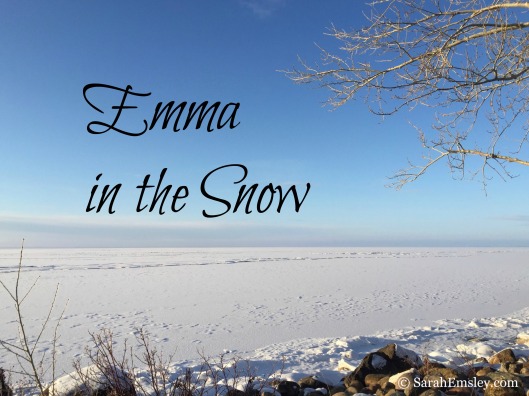