Sarah Woodberry is a writer, editor, and creative writing instructor who loves to reread Jane Austen. She’s a member of JASNA’s New York Metropolitan Region and she teaches at Norwalk Community College in Connecticut. She says while she subscribes to the theory that “whichever Austen novel one is reading is the favorite,” she has a soft spot for Emma: “Every time I read the final line, I want to flip back to page one and start Emma again.” She first read the novel as a teenager and she’s reread it many times since then because she finds it “the sunniest and happiest” of Austen’s novels. It’s the book she turns to—and recommends to friends—“in tough or stressful times.”

Sarah wrote a guest post called “Worn Out with Civility at Mansfield Park” for my Mansfield Park series, and she wrote about Mr. Knightley in today’s guest post for Emma in the Snow. She blogs about reading and writing at Word Hits and you can find her on Twitter as well: @WordHits. It’s a pleasure to introduce her post on why Mr. Knightley is her favourite Austen hero. 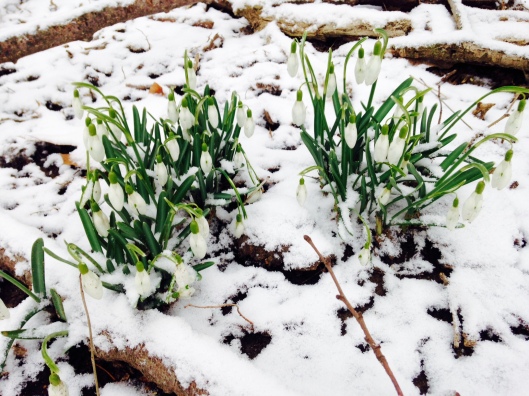 Sarah’s photo of snowdrops in the snow

I don’t have an “I Heart Darcy” t-shirt. To be sure, when reading Pride and Prejudice, one cannot help but be enamored of Mr. Darcy. But really, when it comes to Jane Austen’s heroes, my heart belongs to Mr. George Knightley. He has all the advantages of Darcy—land, position, looks—but “with a real liberality of mind” (Volume 1, Chapter 18).

Despite his status as the most prominent landowner around, Mr. Knightley is not a snob. He has “a delicacy towards the feelings of other people” (Volume 1, Chapter 18). He shows attention to those less fortunate, like the Bateses and the orphaned Jane Fairfax. He’s happy to visit the “only moderately genteel” Coles (Volume 2, Chapter 7). When Harriet Smith is snubbed so publicly by Mr. Elton at the ball, Mr. Knightley makes a point of leading her onto the floor. Emma calls him “benevolent” (Volume 2, Chapter 8), and Harriet notices his “noble benevolence” (Volume 3, Chapter 11).

That’s not to imply that he has no backbone. As he says to Emma, a man can always do “his duty; not by maneuvering and finessing, but by vigor and resolution” (Volume 1, Chapter 18). Mr. Knightley politely checks the rather pushy Mrs. Elton, saying, “there is only one married woman whom I can ever allow to invite what guests she pleases to Donwell” (Volume 3, Chapter 6). While everyone at the Christmas party is debating the snowfall, Mr. Knightley walks down the road to examine its depth before sounding the all clear. When Hartfield does get snowbound, their only visitor is Mr. Knightley, “whom no weather could keep entirely from them” (Volume 1, Chapter 16).

While Austen doesn’t really describe Mr. Knightley’s appearance, his attractiveness is implied. Emma tells Harriet “you might not see one in a hundred, with gentleman so plainly written as in Mr. Knightley” (Volume 1, Chapter 4). After meeting him, Mrs. Elton positively gushes about “Knightley,” and, after one dance, Harriet becomes smitten. At that ball, Emma begins to notice him herself. “His tall, firm, upright figure, among the bulky forms and stooping shoulders … was such as Emma felt must draw every body’s eyes … there was not one among the whole row of young men who could be compared with him” (Volume 3, Chapter 2).

Still, what is most endearing about Mr. Knightley is his relationship with Emma. As the novel opens, we learn that “[they] always say what [they] like to one another” and have a teasing rapport. “You made a lucky guess,” he says when she boasts of matchmaking. “Have you never known the pleasure and triumph of a lucky guess?” she retorts (Volume 1, Chapter 1). Emma jokes that his walking everywhere, instead of taking a carriage, “is a sort of bravado, an air of unaffected concern.” He replies, “‘Nonsensical girl!’ … but not at all in anger” (Volume 2, Chapter 8).

Their unique situation, in which Emma’s father expects Mr. Knightley daily, allows them to spend an unusual amount of time together. They are often alone—something that was prohibited of a suitor in those days. With the exception of Fanny Price, who lives in the same house as her cousin Edmund, Austen’s other heroines see their men at balls or chaperoned social calls, with limited one-on-one time. Emma and Mr. Knightley thus know each other better than most couples would. When Emma tells him that Harriet declined Robert Martin’s offer of marriage, Mr. Knightley instantly knows that Emma wrote the letter herself. When Mrs. Weston suspects that Mr. Knightley sent Jane the piano, Emma counters, “Mr. Knightley does nothing mysteriously … if he intended to give her one, he would have told her so” (Volume 2, Chapter 8). A little later, he says nearly the exact same words himself.

When he tells Emma that he loves her, he also feels that she “knows” him and “understands” him (Volume 3, Chapter 13). That’s what is so truly wonderful about their relationship—their connection. “Seldom, very seldom, does complete truth belong to any human disclosure; seldom can it happen that something is not a little disguised, or a little mistaken; but where, as in this case, though the conduct is mistaken, the feelings are not, it may not be very material.—Mr. Knightley could not impute to Emma a more relenting heart than she possessed, or a heart more disposed to accept of his” (Volume 3, Chapter 13). Likewise, Mr. Knightley knows Emma. He’s seen her make big mistakes, such as ridiculing Miss Bates. But, in the end, he finds her “faultless in spite of all her faults” (Volume 3, Chapter 13).

Now I must address the age issue, as so many readers balk at that. (There was a good deal of discussion about this topic in the comments on Kirk Companion’s guest post “Why do readers object to the romance between Emma and Mr. Knightley?”) Yes, Emma is 21 and Mr. Knightley is 37; however, in Regency society this was par for the course. Emma argues that Robert Martin, at 24, is too young to marry. The main objection to the potential romance between Mr. Knightley and Jane Fairfax, also 21, is her lack of money and social status. Mrs. Weston comments, “Excepting inequality of fortune, and perhaps a little disparity of age, I can see nothing unsuitable” (Volume 2, Chapter 8). In Sense and Sensibility, Marianne Dashwood is only 16 when she marries the 35-year-old Colonel Brandon. In Pride and Prejudice, Lydia Bennet is “out” at age 15, meaning that she is on the marriage market. When she runs off with Wickham their elopement is decried because it is scandalous—not because he is about 28. In fact, Mrs. Bennet boasts that Lydia has married so early. Elizabeth Bennet will not admit to Lady Catherine de Bourgh that she is already 20. Both Fanny Price of Mansfield Park and Catherine Morland of Northanger Abbey are 17. It must be noted that at 21 Emma is older than every one of Austen’s leading ladies, except Anne Elliot (whose older age is a plot point). Throughout Emma, Austen describes Mr. Knightley in youthful and vibrant terms.

As to the much debated moment when Mr. Knightley tells Emma he’s loved her since she was 13 … he is joking! Out of context, and by contemporary standards, this sounds rather creepy, but it’s actually another example of their playful banter. They are talking of how indulged Mrs. Weston’s baby girl will be, and Mr. Knightley jests that he’s “losing all [his] bitterness against spoilt children” now that he has found happiness with Emma. Indeed, he feels he has been too nitpicky with her: “by dint of fancying so many errors, [I’ve] been in love with you ever since you were thirteen at least.” He’s being facetious. He means that he somehow fell in love with her despite pointing out all her cheeky behavior. In reply, Emma says it would be the “greatest humanity” for Knightley to guide baby Anna—except, she quips, for falling in love with her at 13 (Volume 3, Chapter 17). Would Emma joke in this way or urge him to pay attention to little Anna if she thought Mr. Knightley serious? After all, she banished Harriet for having a crush on him.

Austen makes it clear that Mr. Knightley did not think of Emma romantically until she showed an interest in Frank Churchill. “He had been in love with Emma, and jealous of Frank Churchill, from about the same period, one sentiment having probably enlightened him as to the other” (Volume 3, Chapter 13).

The episode serves as a glimpse into their continued playfulness. Austen’s other novels basically end after the proposal, but in Emma we see the betrothed as couple. They tag-team in announcing their engagement to her reluctant father: Emma breaks the news and Mr. Knightley then joins them. When he offers to move into Hartfield, he asks Emma to think on it—and they make this decision together. This move is a huge concession from Mr. Knightley. “How few of those men in a rank of life to address Emma would have renounced their own home for Hartfield” (Volume 3, Chapter 17). Finally, when discussing Frank Churchill’s shameful treatment of Jane Fairfax, Mr. Knightley observes: “my Emma, does not every thing serve to prove more and more the beauty of truth and sincerity in all our dealings with each other?” (Volume 3, Chapter 15)

Mr. Knightley “is not a gallant man,” says Emma (Volume 2, Chapter 8). He does not carry her through a rainstorm, or rescue her sister from ruin, or return victorious from sea. Still, Austen, who loved wordplay, named him “Knight-ley.” His is a sort of quiet heroism. Just as Emma is able to see this in him, by proxy so do I. Perhaps because she knows him so intimately, I also feel a special connection. To me, Mr. Knightley has all the recommendations of a true Austen hero … and just a little bit more.

Quotations are from the Penguin Classics Edition of Emma, edited by Fiona Stafford (2003).

Twenty-third in a series of blog posts celebrating 200 years of Jane Austen’s Emma. To read more about all the posts in the series, visit Emma in the Snow. Coming soon: guest posts by Deborah Yaffe, Kim Wilson, and Paul Savidge.

31 thoughts on “My Heart Belongs to Mr. Knightley”