It’s a pleasure to share this guest post from Christy Ann Conlin, who drew inspiration from two of Nova Scotia’s most beautiful museums, Prescott House and Uniacke House, when she created a grand estate named “Petal’s End” in her new novel, The Memento. For a long time, Petal’s End has been “just a big empty house and sprawling grounds, waiting for a party that never started, for guests that never arrived, a family who was missing,” but at the beginning of the novel Fancy Mosher, the twelve-year-old narrator who has a summer job at the estate, says “There is much to do, what with the rumour Lady Marigold Parker is finally coming back.”

Fancy and the other members of the household staff know little about what to expect that summer—though they do know that the Parker women are fighting with each other—but Fancy and her friend Art are excited about the idea that “Petal’s End might come back to life, alive again with all them stories we’d grown up on, the parties and the exotic visitors from all over creation.” Lynn Coady calls The Memento “Lovely and sinister … a gorgeous unveiling of the relentless darkness that awaits beneath the pristine, orderly beauties we so painstakingly impose.”

Christy Ann’s first novel, Heave, was a Globe and Mail “Top 100” book and a finalist for the Amazon.ca First Novel Award in 2003. She teaches in the University of Toronto School of Continuing Studies online Creative Writing program and she lives in Wolfville, Nova Scotia, not far from Prescott House. She’s currently working on two novels and a short fiction collection, and this weekend she’ll be at the Cabot Trail Writers Festival in Cape Breton to read from The Memento and teach a writing workshop. Later this fall, she’s doing two graveyard readings by candlelight, one at the Annapolis Royal Ghost Town Festival on October 21st and one at the Anglican church in Wolfville on All Souls’ Day, November 2nd.

A couple of weeks ago, Christy Ann and I spent an afternoon in the Prescott House garden, talking about books and writing and our shared interest in novels by Jane Austen and Edith Wharton. It was the perfect way to spend one of the last days of the summer. Here’s one of the photos I took that afternoon. 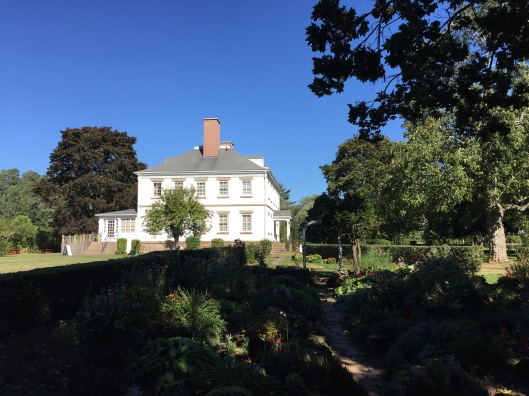 I wrote a little bit about the history of Prescott House a few years ago, after our local Jane Austen Society of North America group gathered there for iced tea and a discussion of Kim Wilson’s book In the Garden with Jane Austen. (For more photos of the house, including a postcard from the 1980s, when the house was covered in ivy and looked very different, see “Flowers are great, but frogs are even better…”). And I wrote a short post about Uniacke House and Lake Martha six years ago, not long after I started this blog.

While I’m on the topic of JASNA Nova Scotia meetings, I also want to mention—for those of you in the Halifax area—that Claire Bellanti, President of JASNA, is in town this weekend and she’ll be giving a talk at Dalhousie University this afternoon, entitled “‘You Can Get a Parasol at Whitby’s’: Circulating Libraries in Jane Austen’s Time” (3:45pm at the McCain Arts and Social Sciences Building, Room 1198). She’ll also be speaking at our wonderful new Central Library on Sunday at 2pm in Room 301, and the title of her talk is “Who Is Jane Austen?”

I’m delighted to introduce Christy Ann’s guest post on the value of solitude and stillness, beautifully illustrated by photos from her visits to both Prescott House and Uniacke House earlier in the summer. 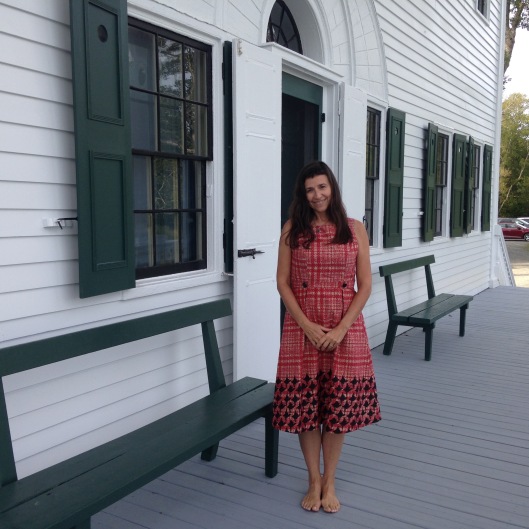 Barefoot on the verandah of Uniacke House Estate in Mount Uniacke, Nova Scotia. This country home, with parkland and lake, is a provincial museum. I’ve visited here since I was a child and this Georgian manor was part of the inspiration for Petal’s End in The Memento. When the province bought the estate (1000 acres of land, much of it open to the public with walking trails) it came complete with the all the original furnishings, artwork, books, and china!

We are in such a hectic century. This summer was dizzying one for me, and even when I was on a beach or some such place, work never seemed to end. The outside world was always creeping in as it does for so many of us, through a phone screen. So quite suddenly, I slipped away from screens and social media.

It has been a sweet elixir for my soul, I have to say, stepping back into a quieter and more old-fashioned pace. I swam in the river and read books and strolled through gardens, and visited some of my favourite old manor homes. 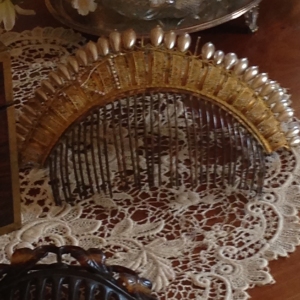 Looking through to the nursery at Uniacke House

Walking through the windy meadow… Is that Heathcliff calling? My “Cathy” moment.

And back to the 21st century, facing my darling husband/photographer!

And this time away from social media also led me to realize why I’ve loved Jane Austen and the Brontës, Edith Wharton, and L.M. Montgomery, both reading their works, and creating my own world so inspired by them, for those books create a sense of place and time that is all consuming. It is not fragmented by the speed of our world today, where we zoom in cars and we zoom in text messages, where every aspect of our lives is now hurried along, scheduled so tightly, with so little time to be present, so little time to observe the moment we are in, the space and time.

The restored gardens at Prescott House Estate in Starr’s Point, Nova Scotia—yet another gorgeous Georgian manor home and estate, now a provincial museum. My mother took me here as a child, and it is a pleasure to take my own children here for art workshops and picnics in the garden. I’ve also had the pleasure of teaching creative writing workshops here in the sunroom. This estate had a huge influence on the development of the fictional “Petal’s End.” The aristocratic cousin in The Memento, Harold Prescott, is proof of that!

Under the roses climbing the arbour on a balmy July evening (photo credit: Marie Cameron)

What a gift from these books, to be reminded to wander and linger, to embrace solitude and stillness, and from a quiet state of mind, find that place in the world where we desire more than anything to be.

My “pink chairs of contemplation” at the edge of our lily pond. I was so happy to have time to sit and read while the ducks and geese paddled by with their babies.

An aerial photo of our home in Wolfville, Nova Scotia. The orchards are now gone but the house is very much the same as it was when it was built in 1820. From the Richard McCully Aerial Photograph Collection, 1931 (Nova Scotia Archives). 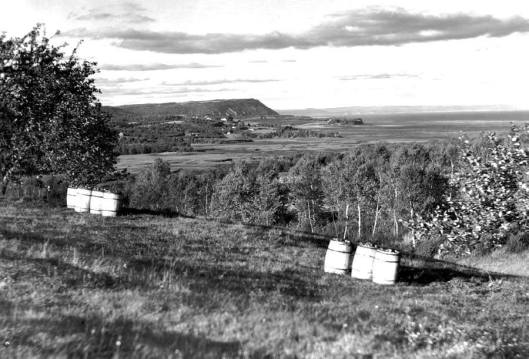 A photo taken in the 1920s by W.R. MacAskill of the Annapolis Valley, looking across the Minas Basin to Cape Blomidon (Nova Scotia Archives). The view from the orchard in back of our house still looks very much like this.

20 thoughts on “The Sweet Exhilaration of Solitude”