Inspired by Christy Ann Conlin’s guest post on “The Sweet Exhilaration of Solitude,” I spent some time in the Halifax Public Gardens on Wednesday morning, admiring the flowers and the sunlight and shadows and taking a few photos. Inspired by the first post at Shawna Lemay’s new blog, “Transactions with Beauty,” in which she says, “As often as I find beauty, I want to send beauty out into the world, too,” I’d like to share these beautiful dahlias here. 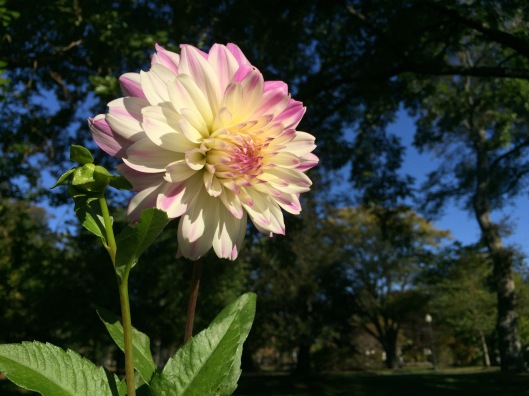 Last October, I took hundreds of dahlia photos, some of which I included in this blog post I wrote about “L.M. Montgomery and the Halifax Public Gardens” (“She’ll feel awful bad if her flowers get frosted, especially them dahlias. Octavia sets such store by her dahlias.” From Montgomery’s 1914 short story “Bessie’s Doll.”)

This year, partly because of Christy Ann’s words about the value of “slipp[ing] away from screens and social media,” I decided not to write a long blog post about dahlias. Instead, after I share these photos with you, I’m going to return to the two main writing projects I’m working on this fall: the first is a novel (which I started several years ago and am currently revising), and the second is a lecture on Jane Austen’s Emma Woodhouse, “faultless in spite of all her faults,” for the Jane Austen Society of North America AGM in Washington, DC, later this month. 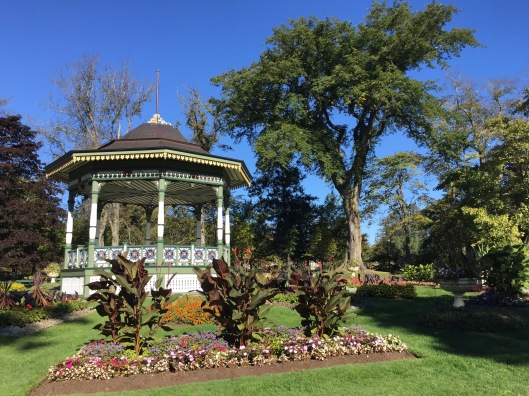 The bandstand in the Public Gardens

Another view of the bandstand in the Public Gardens. From this perspective, you can see that the gardeners are in the process of getting ready to plant spring bulbs.

Nova Scotia is lovely at this time of year. So is Prince Edward Island, which I visited in early October last year, when I was reading Montgomery’s Anne of Ingleside. Like Anne Shirley, I’m “so glad I live in a world where there are Octobers,” and I agree that “It would be terrible if we just skipped from September to November” (Anne of Green Gables, Chapter 16).

I’m going to slip away from the screen today, and go outside to walk or run and appreciate the glorious October weather while it lasts. And when I come back in, instead of checking email or working on the computer, I’m going to pick up a stack of manuscript pages and a pen and revise what I wrote yesterday.

17 thoughts on “On Not Skipping from September to November”