It’s a pleasure to introduce Melanie J. Fishbane’s guest post on L.M. Montgomery’s journals and her “Emily” books. Melanie is the author of Maud: A Novel Inspired by the Life of L.M. Montgomery, which was published by Penguin in April. Publishers Weekly calls it “a delightful debut novel,” and Karen Krossing writes that “Fans of Montgomery’s novels will adore this exploration of her bosom friends, her handsome and teasing suitors, her rigid grandparents, and the challenges she faced in pursuing her dream of becoming an author.”

Melanie has an MFA in Writing for Children and Young Adults from the Vermont College of Fine Arts and an MA in History from Concordia University, and she often lectures on children’s literature and L.M. Montgomery. Her essay “‘My Pen Shall Heal, Not Hurt’: Writing as Therapy in L.M. Montgomery’s Rilla of Ingleside and The Blythes Are Quoted” was published in L.M. Montgomery’s Rainbow Valleys: The Ontario Years, 1911-1942, edited by Rita Bode and Lesley D. Clement (McGill-Queen’s University Press, 2015). She says she’s been obsessed with Montgomery since she first read Anne of Green Gables when she was in Grade Six. She’s a freelance writer and social media consultant, and she teaches English at Humber College. She lives in Toronto with her partner and their cat, Merlin. You can find her on Twitter @MelanieFishbane and on Facebook. 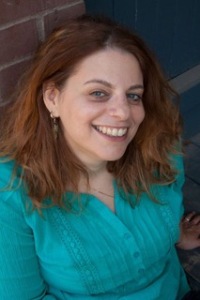 Last week, Melanie visited Nova Scotia and Prince Edward Island to read from Maud, and she and I had a fantastic time touring literary sites in Halifax with my friend Marianne Ward, a freelance editor and a long-time fan of Montgomery’s novels. Here are a few photos from that rainy afternoon, and, at the end of this post, from Melanie’s readings in the Halifax Public Gardens and at Mabel Murple’s Bookshoppe & Dreamery in River John, NS.

First, the Old Burying Ground, fictionalized as “Old St. John’s Cemetery” in Anne of the Island. Anne’s friend Priscilla says, “a few years ago they put up a beautiful monument to the memory of Nova Scotian soldiers who fell in the Crimean War. It is just opposite the entrance gates and there’s ‘scope for imagination’ in it.” 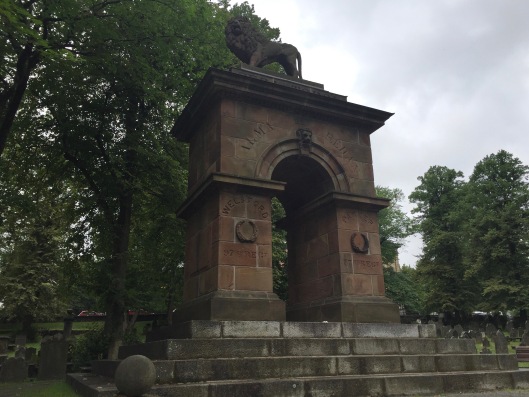 Of course I had to point out Government House, across the street from the Old Burying Ground, because it’s on the “Austens in Halifax” walking tour that Sheila Johnson Kindred and I wrote and posted on my website a few weeks ago:

The house on Church Street where L.M. Montgomery lived when she was working in Halifax at The Daily Echo. Looks as if it’s still for sale. Anyone want to buy it and turn it into a museum?

The Forrest Building at Dalhousie University, fictionalized as Redmond College in Anne of the Island:

The final stop on our tour was Point Pleasant Park. Montgomery found her walks at Point Pleasant provided consolation when she missed her Prince Edward Island home, and she mentions the park, its shore road, and its pavilions in Anne of the Island. Here’s a photo of Melanie (on the left) and Marianne at Point Pleasant, along with another photo that I took on a different visit to the park last week. 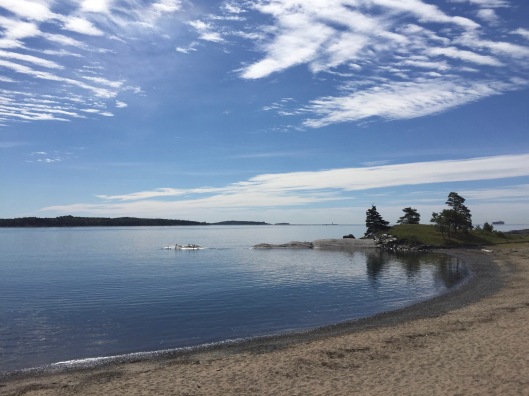 Melanie and Marianne and I didn’t have time, unfortunately, to visit the building Montgomery worked in when she wrote for The Daily Echo in 1901-02, but Melanie and I did get there this past Monday, after her reading in the Public Gardens.

The building is now the home of The Old Triangle pub, and it’s where we hold meetings for our Project Bookmark Canada Halifax Reading Circle. Marianne is a member of the group and it was her brilliant idea a couple of years ago that we should meet there because of the literary connection with Montgomery.

I was thrilled to hear the announcement last week that the first Bookmark in PEI is for one of L.M. Montgomery’s poems, “The Gable Window,” and that it will be unveiled at her grandparents’ homestead, known as The Site of Lucy Maud Montgomery’s Cavendish Home, on June 24, 2018. I think it’s wonderful news, and I’m excited about future Bookmarks across Canada, especially in Nova Scotia and PEI.

(If you’re interested, you can read more about our Reading Circle in this article on the Project Bookmark website: “Reading Circles Link Readers Across Canada.” There are a couple of photos of the homestead in a blog post I wrote a few years ago about “L.M. Mongtomery’s Literary Pilgrimage to Concord, Mass.” And there’s more information about Montgomery-related sites in Halifax on my “L.M. Montgomery in Nova Scotia” page.)

One of the first images that came to me when I began writing Maud: A Novel Inspired by the Life of L.M. Montgomery was of Maud throwing her journal into the stove and watching it burn. She was fourteen. Having kept a journal since I was fourteen (and having read it since), I can imagine wanting to burn away certain trivialities. (Don’t worry, I haven’t.)

The journal that L.M. Montgomery burned, however, was one that she had kept since she was nine. While she says in her new journal that she burned it because it had trivial musings about the weather and it was “also very dull,” she also writes that this time, “I am going to keep this book locked up!!” (The Complete Journals of L.M. Montgomery: The PEI Years, 1889-1900).

It made me wonder: Why? Why would Montgomery want to keep her new journal locked up with such urgency the idea required not one, but two exclamation points!! (And we all know what Mr. Carpenter—in the “Emily” books—thought of those!!)

I discussed this question with one of my writer friends, who reminded me that some stories are easier to write about in fiction. Even if diaries are supposed to be private in nature, there is a possibility that they will be read. Montgomery scholars Elizabeth Waterston and Mary Rubio have discussed Montgomery’s revisions to her journals, and the special instructions about their publication that she left for her sons to read after she died. So, again I wondered: What was too painful for Montgomery to write about in her journal? Even when she was revising it? Or, had it been there and it was too painful to revisit it?

While I always think it is dangerous to see direct connections between an author’s life and fiction, I do think there are some truths in these connections. And Montgomery encouraged readers to see these links between her life and art, particularly in her autobiography, The Alpine Path. Readers continue to make these links, and they travel from all over the world to visit her fictional worlds in real places.

So, I returned to her fiction, looking for clues about Montgomery’s writing process and the questions she had about writing, trying to answer not just the question about why she might have burned her journal, but the other hidden truths, the things that the journals weren’t saying.

The Emily books became very important in this process because my novel was a portrait of the artist as a young woman. I returned to Emily to see if I could learn more about Montgomery as a teenager. As Alice Munro points out in the afterword she wrote for Emily of New Moon, the novel’s central focus is “the development of a child—and a girl child, at that—into a writer.” Montgomery had said that the Emily novels were more autobiographical than the Anne novels. Writing is essential, as Emily says to Mr. Carpenter at the end of the novel (in italics—good thing it was just dialogue as we know what her teacher thought of those in print), “I have to write—I can’t help it at times—I’ve just got to.” This idea echoes something Montgomery wrote in a letter to G.B. Macmillan about the urge to write and how the only thing she ever wanted to do was write. It was part of the narrative of her experience, of how she wished people to see her—and maybe how she wished to see herself.

Bringing these ideas back to my fictional character based on a real person meant that I had to take all that I learned and allow her voice to tell me who she was and what she wanted. Perhaps it was too painful to write in her journal about it being discovered by one of her family members? Maybe Montgomery felt something sacred had been tarnished, just as Emily felt after her Aunt Elizabeth read the private letters she wrote to her father after his death. While it might be those long-lost journal entries were really about the weather, I had to wonder if there was more in them that Montgomery had burned away when she was fourteen. Perhaps she wrote about her time living at Aunt Emily’s, or what happened with Izzie Robinson, or how long it had been since she had seen her father. We will never know. But writing historical fiction allowed me to consider these questions and delving into the Emily series helped me find those aspects, while (I hope) being true to the character I had created. 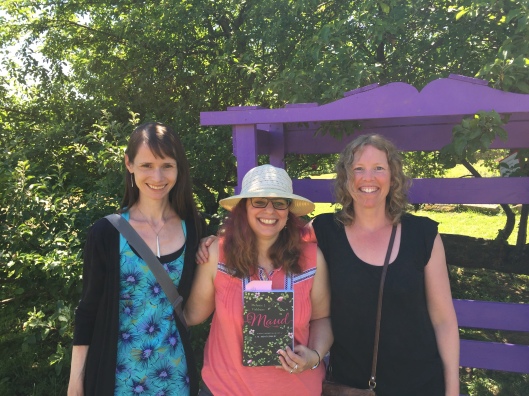 That’s me on the left, with Melanie (and Maud) in the middle, and Naomi MacKinnon (of consumedbyink.ca) on the right

A couple of photos I took on opening day at Mabel Murple’s, in early July: 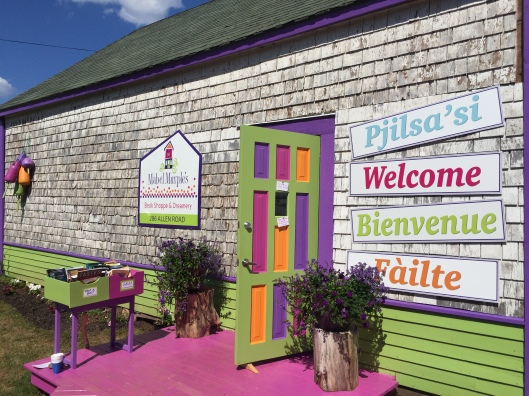 A beautiful display of copies of Melanie’s novel Maud at Mabel Murple’s:

7 thoughts on “Searching for Maud in the “Emily” Series”