Sheila Johnson Kindred’s biography of Fanny Palmer Austen was published earlier this month by McGill-Queen’s University Press, and she kindly agreed to answer a few questions about the book for my blog. Sheila has done extensive original research on the life of Jane Austen’s naval brother Charles and his wife Fanny, and she has written about the connections between their experiences and Austen’s novels. Her essays have been published in Persuasions and The Jane Austen Society Report, and in a collection of essays called Jane Austen and the North Atlantic, which I edited for the Jane Austen Society. 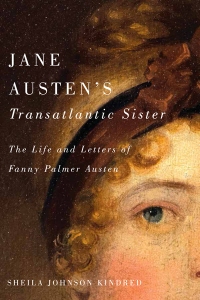 If you’ve been reading my blog for a while, you may remember that in June, Sheila and I gave a paper together at the Jane Austen Society conference in Halifax, Nova Scotia on “Charles and Francis: Jane Austen’s Sailor Brothers on the Royal Navy’s North American Station,” and that we created a walking tour that describes Austen-related sites in Halifax. A few years ago, we wrote a paper together called “Among the Proto-Janeites: Reading Mansfield Park for Consolation in Halifax, Nova Scotia, in 1815.”

I’m excited about the publication of Sheila’s wonderful book Jane Austen’s Transatlantic Sister: The Life and Letters of Fanny Palmer Austen, and it’s a real pleasure to feature the book on my blog today. Sheila taught for many years in the Philosophy Department at St. Mary’s University in Halifax, and she has spoken at Jane Austen Society of North America AGMs in Quebec City, Philadelphia, New York, and Washington, DC, as well as at Jane Austen Society (UK) conferences in Halifax (2005 and 2017) and Bermuda (2010). She lives in Halifax with her husband and their cat. 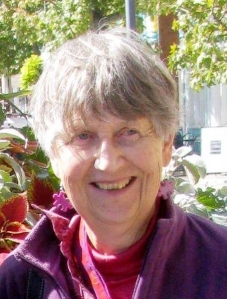 The launch for Jane Austen’s Transatlantic Sister is on Monday, November 6th at 7pm at the Central Library in Halifax, Nova Scotia. If you’re in the Halifax area, I hope you’ll come and celebrate with Sheila! 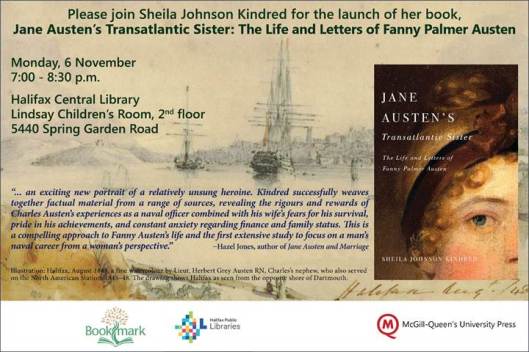 Sarah: I know you’ve been interested in Jane Austen, her fiction, and her family for a great many years, and I know you have a background in teaching and writing about philosophy. What led you to explore the life and letters of Jane Austen’s sister-in-law Fanny Palmer Austen? Did you find that there were connections with your earlier work in philosophy or did you think of this historical research as an entirely new project?

Sheila: Why write a biography of Fanny Palmer Austen? She intrigues me. I came upon Fanny first through extensive research into the naval career of her husband Charles, Jane Austen’s youngest brother. When I considered that she had spent parts of two years, and a tiny part of a third in Halifax, the place I call home, and when a conversation at a JAS AGM encouraged me to look closely at Fanny’s life and letters, I realized this was the very project I wanted to undertake. Thus began a long search for relevant information which has been sometimes frustrating, often rewarding, but on balance more than worth the effort. Fanny has turned out to be a spirited and resilient young woman, a naval wife who loyally supported Charles in his career, and who bravely faced unusual challenges as she made a home for her family both on land and on sea during the later years of the Napoleonic Wars. Additionally, I had the great fortune to view Fanny’s oil portrait by Robert Field during the early years of my research. Here was Fanny as she appeared in Halifax in 1810, the very time I was writing about her; I found a depth of expression in a lovely face. While I was thinking about her and writing about her it was important to have this evidence of her physical presence.

My philosophic background has had considerable influence on how I approached the challenge of writing biography. Extensive experience in teaching argumentation has led to a rigorous attention to matters of evidence. In the search to find out who Fanny was, to determine her personality and character it was important to make claims which were supported by relevant facts and to adjust the strength of those claims in proportion to the support I could muster for them. Seeking to characterize Fanny also brought to mind issues about identity and autonomy, notions which have roots in philosophic discourse.

Doing historical research was not something entirely new as my previous work on facets of Charles Austen’s naval career had required this sort of approach.

Sarah: Fanny was born in Bermuda in 1789 and spent time in Nova Scotia in 1809, 1810, and 1811 before travelling to England where she spent the rest of her life. What can we learn from her experiences in these three places and from her letters?

Sheila: Descriptions of the lives of naval wives during the Napoleonic Wars, who were directly involve with their husbands’ naval careers, are very scant. Fanny’s story, about her experiences on the North American station of the navy and then in English waters, fills a gap in this deficit of information. Much of her story is illuminated by two sets of letters, one from Halifax, Nova Scotia and the other from England.

Fanny’s Halifax letters give an intriguing profile of the Halifax military and social community of 1810. She comments astutely on the social scene and the dynamics of social relationships. She tells us who is there; she speaks of a busy naval port in wartime, and especially of the significance for her when Charles is ordered to transport troops to a potentially dangerous warzone off Portugal, while she is left behind in Halifax.

Her letters from England are more emotionally sophisticated and complex as her duties and obligations have increased. By early 1812 Fanny was making a home for Charles and their three daughters on board a working naval vessel, HMS Namur. She is frank about the challenges and difficulties she faces in this unique situation.

Fanny’s experiences in both Halifax and England shed light on what it was like to be confined by the social and cultural conventions of genteel Georgian society. She was susceptible to the expectations about appropriate behaviour of young women of her class, and she was influenced by the ideology of domesticity to which they were expected to conform. Fanny’s letters show that she recognized the importance of a particular code of conduct but at the same time was developing her own sense of identity and autonomy.

Sarah: What are some of the most exciting things you learned about the relationship between Jane Austen and her “transatlantic sister” Fanny Austen? What did Fanny think of Jane, and to what extent do you think Jane drew on her sister-in-law’s experiences as a naval wife when she was writing Mansfield Park and Persuasion? Did Fanny “glor[y] in being a sailor’s wife,” as Anne Elliot does at the end of Persuasion?

Sheila: Joining the Austen family brought Fanny into a relationship with Jane Austen, a state of affairs that intrigued me. It was exciting to discover how much they were in contact with one another, initially by letter and then in person when Fanny moved to England in 1811. Jane describes Fanny in familiar language in letters to Cassandra. She is referred to as “Mrs. Fanny, one of the “two Fanny’s, “Fanny Senior,” “[Cassy’s] Mama,” and part of the “the Charleses.” On an occasion when they met at Godmersham, Jane describes Fanny as “just like [her]own nice [self].” Fanny’s experiences as a naval wife were, I believe, useful sources for Jane Austen, for naval detail but also as an inspiration for some of the naval wives in Persuasion: most significantly Mrs. Croft, but also to a lesser degree, Anne Elliot and Mrs. Harville. In comparing the experiences of Fanny and Mrs. Croft I found interesting parallels in terms of patterns of travel, worries about their husband’s well-being when they were apart, practical attitudes to matters of everyday living, and much more. I explore these parallels in some detail in Chapter 9 of my book.

Did Fanny “glory in being a sailor’s wife?”  Fanny was definitely proud of Charles’s naval accomplishments and she more than likely shared Anne Elliot’s opinions about the virtues of the navy as an institution. Additionally, I think that her close connection with his career, both on land and on sea, made her feel that she too was an integral part of Charles’s naval world. Yet there was inevitably less glory to be had when she was anxious about his well-being and she found their family life constrained by his professional obligations.

Sarah: What is the best advice you have received about writing and editing?

Sheila: Find some willing critical readers. Good feedback is essential to the process of writing.

Follow the advice of Jane Austen who spoke of “lopping and cropping” her manuscript.

Keep asking yourself what is essential. 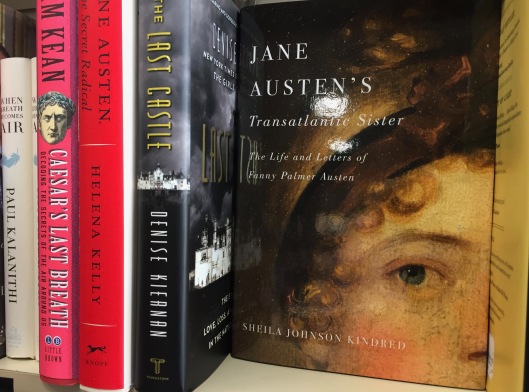 Thanks, Sheila, and congratulations on your new book!

9 thoughts on “Jane Austen’s Transatlantic Sister: The Life and Letters of Fanny Palmer Austen: Q & A with Sheila Johnson Kindred”