“There was no reason to think she would grow up to be anything out of the ordinary,” says Lisa Pliscou on the first page of her new picture book biography of Jane Austen. Brave Jane Austen: Reader, Writer, Author, Rebel will be published next week by Henry Holt/Macmillan, and you can read more about it (and see a few sample pages) on Lisa’s website. 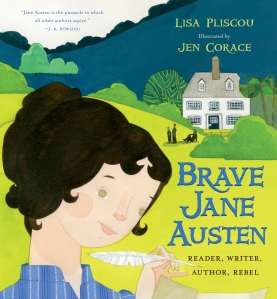 I really enjoyed Lisa’s book Young Jane Austen: Becoming a Writer, which I wrote about when it was published in 2015 (“Imagining Jane Austen’s Childhood”), and I’m excited about her new book.

Lisa writes for children and adults, and her other books include a novel, Higher Education, which David Foster Wallace praised as “an authorial coup.”

Congratulations on Brave Jane Austen, Lisa! And thank you for writing today’s guest post for my blog series “Youth and Experience: Northanger Abbey and Persuasion.”

Seeing “The Graduate” again decades after an initial viewing is, appropriately enough, like attending a college reunion. Films are in a sense like old friends, and revisiting them years later inevitably raises the question of whether what you once enjoyed still brings you pleasure.

I have a wonderful time on my first visit to Northanger Abbey.

All is light and bright and sparkling.

I take great pleasure in Austen’s skill at creating characters who—with their virtues and flaws, mannerisms and idiosyncrasies—come alive in their authenticity. They reach across the span of time and place: these are fully recognizable people.

Too, I enjoy how Austen pokes fun at the literary excess of her era’s Gothic novels. Her voice is deft, witty, engendering an almost conspiratorial quality which invites the reader to share in her solipsistic worldview.

In this atmosphere of camaraderie, then, how easy to feel sympathetic interest in the artless Catherine Morland. How easy to fall under the spell of Henry Tilney’s wit and charm. To sail lightly on the story’s surface, drawn along by its author’s dazzling self-assurance.

I surrender to Northanger Abbey just like Catherine giving her heart to Henry: speedily, entirely. Naively. The ending satisfies. General Tilney is routed by his son Henry’s defiance, there is reconciliation, there is a wedding.

The story is the same, but it’s I who am different.

The writing I still love, but the ending now troubles me. It seems thin, rushed.

I remember watching The Graduate a second time, after a long interval, and being struck by that indelible moment when Ben and Elaine are sitting together at the back of the bus and their triumphant exuberance begins to fade. All at once I—a more thoughtful, more sophisticated viewer than when I first saw it—realize that I’m watching not just a biting comedy but also, possibly, a tragedy.

I recall Joan Aiken’s razor-sharp portrayal of Elinor Dashwood and Edward Ferrars in her odd, bleak novel Eliza’s Daughter: theirs was a marriage made in the face of devastating family disapproval, and she shows them, years later, ground down by endless drudgery and genteel poverty.

I picture Catherine and Henry at their wedding.

They stand before the minister. The happy couple. Henry victorious, Catherine amazed by her good fortune.

My mind ranges back, into the narrative, thinking about these two characters. These two people.

Henry Tilney’s ardor, the narrator bluntly—slyly—remarks, is the direct result of hers for him:

I must confess that his affection originated in nothing better than gratitude, or, in other words, that a persuasion of her partiality for him had been the only cause of giving her a serious thought.

It is, perhaps, a precarious foundation for a union which must endure till death arrives to sever it.

How long will Henry sustain these feelings for a girl who, though she is sweet-natured and affectionate, doesn’t equal him in intellect or sense of humor? Will he come in time to treat her with the same scornful disdain Mr. Bennet displays toward his wife?

As for Catherine: how long will she continue to uncritically adore a man who is fond of correcting and informing? A young woman of eighteen may be a very different person at twenty-eight or thirty-eight; in maturity will she resent the role of acolyte? If, that is, she survives the many years of pregnancy and childbearing which—“poor animal,” as Austen once described such a woman—is likely to be her lot.

And now my mind stretches ahead, uneasily.

I return again to Northanger Abbey.

I know, now, a great deal more about the life and times and writings of Jane Austen. I know that she wrote it as part of a remarkable creative burst after the abrupt departure of Tom Lefroy—a young man she liked, though the depth of her affection remains a mystery—in the summer of 1796, when she was twenty-one.

Austen began with First Impressions, a romance, in the fall and finished it the next summer. (The title would eventually become Pride and Prejudice.) A few months later she returned to an earlier work, Elinor and Marianne—a debate of sorts, as Claire Tomalin says in Jane Austen: A Life—and renamed it Sense and Sensibility. The following year, extending her artistic range yet further, she wrote a first draft of Susan, a satirical project, which she would revise a few years later, in 1802, in the aftermath of Harris Bigg-Wither’s proposal and her rejection of it. This manuscript she now called Northanger Abbey.

The story is the same, but it’s I who, again, have changed.

I go deeper. Penetrating the sparkling surface and diving down. Here there is light and darkness mingled.

I hold in my mind, this time, the genius of its young author and her incandescent creative growth. I hold in my mind, now, the multiple layers of Northanger Abbey. Austen’s witty meta-level defense of the novel, during a time in which it was often seen as a suspect, inferior, even morally dangerous genre. Her brilliance in locating the true psychological horror not in an old Radcliffian chest but in the very nature of General Tilney. Her sly, defiant subversion of tropes and expectations. She gives over to us a love story as a sweet fillip, legerdemain, which doubles in on itself: reader, here it is, the comic romance plot, the conventional engine, but you won’t be distracted, will you? Because there’s a lot more going on here. Do you see it? Here, in the present moment, look closely, and stay with me, a writer in the bloom of health, youth, infinite promise. Here is my wit, my persuasion, my shrewd divining of human nature, my joke, my riddle, my laughter.

I will return again.

I wonder what I’ll find? 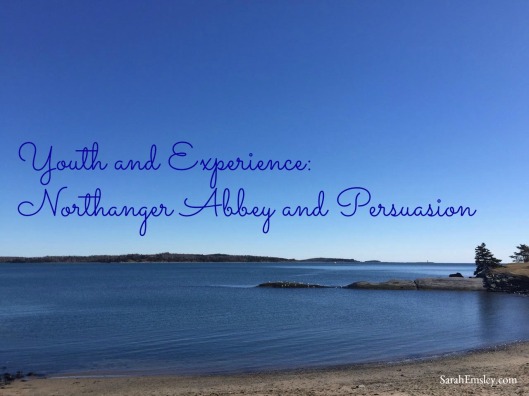 Sixth in a series of blog posts celebrating 200 years of Jane Austen’s Northanger Abbey and Persuasion. To read more about all the posts in the series, visit “Youth and Experience.” Coming soon: guest posts by Leslie Nyman, Gisèle Baxter, and Theresa Kenney.