In the Footsteps of the Austens: A Walking Tour of Halifax, Nova Scotia

Download a PDF of this walking tour: In the Footsteps of the Austens- A Walking Tour of Halifax, Nova Scotia

There are more photos here: “Austens in Bermuda and Nova Scotia.”

Jane Austen never visited Halifax, Nova Scotia, but two of her brothers were stationed in the city during their time in the Royal Navy, and she was very interested in their careers. She drew on their experiences when she wrote her two naval novels, Mansfield Park (1814) and Persuasion (1818). Nova Scotia and Bermuda are the only places in North America where the Austen brothers lived and worked, and it is still possible to see many of the sites they knew. This walking tour of Halifax includes Citadel Hill, St. Paul’s Church, the Naval Yard Clock, Government House, St. George’s Church, and Admiralty House, along with the Art Gallery of Nova Scotia and the Maritime Museum of the Atlantic. 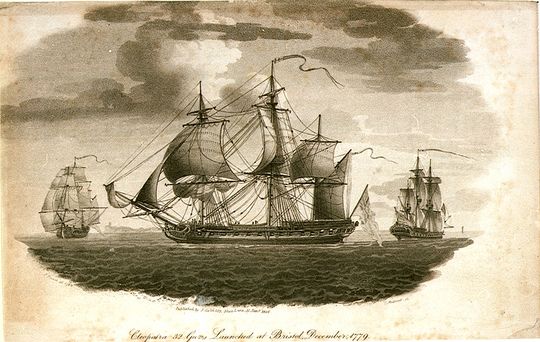 Captain Charles Austen was the first to visit Halifax. He came as a young officer during his appointment to the North American Station of the Royal Navy and stayed several times between 1805 and 1811—first with his ship HMS Indian, a 400 ton, 18 gun sloop of war, later with HMS Swiftsure (74 guns) as flag captain to Admiral Sir John Warren, Commander-in-Chief of the North American Station, and finally with HMS Cleopatra, a 32 gun frigate. It was the turbulent time of the Napoleonic Wars with France and Spain.

In 1811, Jane Austen, who was beginning her novel Mansfield Park, wrote to her sister Cassandra that she knew, “on the authority of some other Captn just arrived from Halifax,” that Charles was “bringing the Cleopatra home” to England (25 April 1811).

Thirty-four years later, in more peaceful times, Admiral Sir Francis Austen arrived on the 50 gun HMS Vindictive as Commander-in-Chief of the North American and West Indies Station, 1845-48. He was seventy-one and on what would prove to be his last command. He and his squadron spent each June to October based in Halifax. 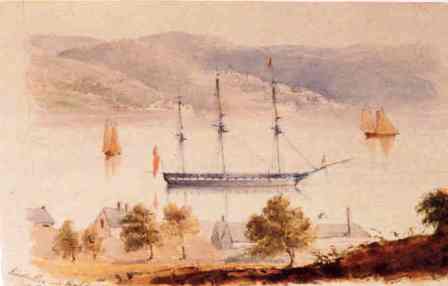 Halifax is famous for its huge natural harbour. It was chosen as a British naval and military base and settlement because of its natural features and its location as the first mainland landfall in North America from Europe. Founded in 1749, Halifax was strategically positioned close to the route to French possessions in Québec to the north and the Thirteen Colonies on the American seaboard to the south.

When Charles was in port between 1805 and 1811, his vessel could be found either moored at the north side of Georges Island or perhaps at one of the anchorages adjacent to the Naval Yard. When Sir Francis arrived each year to set up a summer headquarters, it was most convenient to moor HMS Vindictive close to the Yard and in sight of his official residence, Admiralty House. 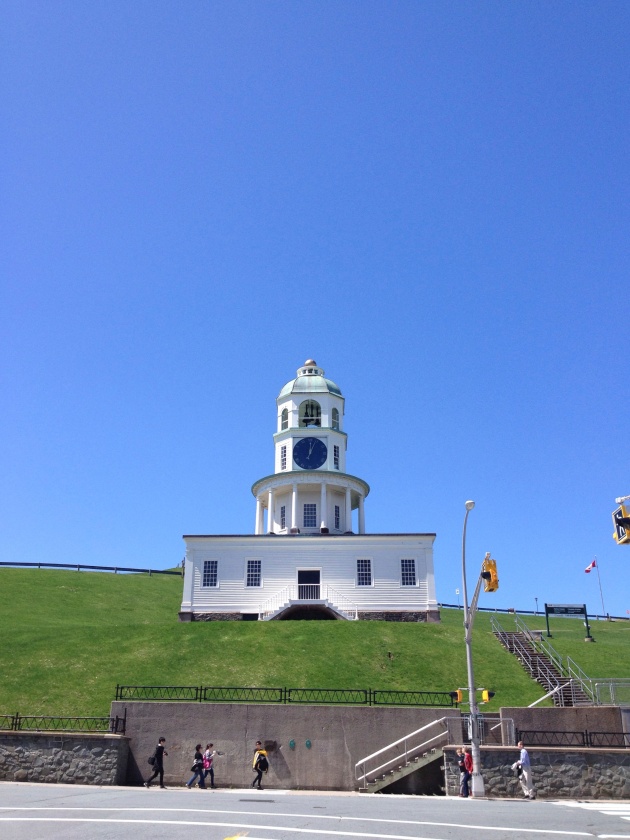 From the Halifax Citadel, there is a fine view of the harbour. You can look out to sea and imagine the Indian, the Swiftsure, the Cleopatra, or the Vindictive arriving or departing. When Charles was sent on a mission to Portugal, his wife Fanny regularly watched the military signal flag at the Citadel in hopes that it would indicate the returning squadron had been sighted on the approach to Halifax. At the base of Citadel Hill is the Town Clock, installed between 1802 and 1803, which was a gift from Edward, Duke of Kent, commander of the military forces in Nova Scotia and New Brunswick. The Citadel retains the original flag mast traditionally used for military signals and regularly uses it to display flags appropriate to the period and the occasion. 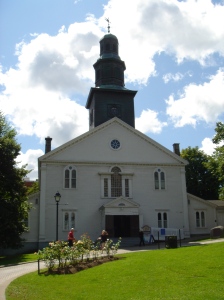 While the Indian was being repaired in the fall of 1809, Charles and Fanny Austen participated in Halifax society, along with Fanny’s sister Esther Esten. Charles and Fanny’s nine-month-old daughter Cassandra Esten Austen (“Cassy”) was baptized at St. Paul’s Church. St. Paul’s, founded in 1749 and opened in 1750, is at the south end of the Grand Parade, a military parade square. The Reverend Robert Stanser baptized little Cassy, and Esther Esten and Charles’s friend Captain Edward Hawker were present as godparents. Cassy’s second godmother, Charles’s sister Cassandra, was in England and she was unable to attend.

A page from the baptismal register of St. Paul’s Church, Halifax, shows the 6 October 1809 baptism of Cassandra, daughter of “Captain Charles John Austen, Royal Navy, and Frances Fitzwilliams his Wife.”

The Art Gallery of Nova Scotia owns several portraits of people associated with Halifax during Charles’s time here, painted by Robert Field, a British artist who was considered one of the best portraitists in North America. The paintings in the collection include one of Provo Wallis, who served on the station with Charles, and who, as 2nd Lt., brought HMS Shannon back to Halifax, with her prize capture, USS Chesapeake, after a resounding defeat of the American vessel off Boston on 1 June 1813. In 1810, Field painted portraits of Charles and Fanny Austen. He worked from a studio above Andrew Morrison’s book store on Hollis Street.

The Gallery owns sketches of Halifax and its Harbour by Michael Seymour, flag captain to Vice Admiral Sir Francis Austen on HMS Vindictive, including “Halifax from McNab’s Island, 25 August, 1845,” and “Admiralty House from the flag ship Vindictive’s mooring, 19 June 1845.” Flag lieutenant Herbert Grey Austen, son of Vice Admiral Austen, made sketches of similar views. His sketches, and the portraits of Charles and Fanny, are privately owned. 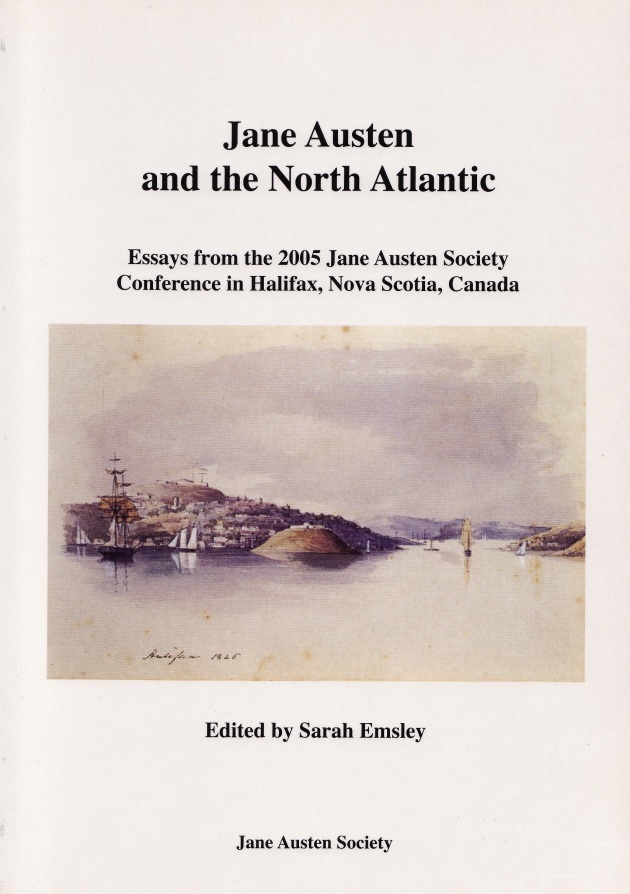 Herbert Grey Austen’s watercolour drawing of Halifax Harbour in 1846 is reproduced on the cover of Jane Austen and the North Atlantic (2006).

The Naval Yard clock, made in London by Aynesth Thwaites, was originally installed on a domed cupola atop the Sail Loft building in the Yard in 1772. It is one of the oldest turret clocks in Canada, and it is now located near the entrance to the Halifax Ferry Terminal. From this vantage point, the anchorages the navy regularly used off nearby Georges Island are in view to the south west. 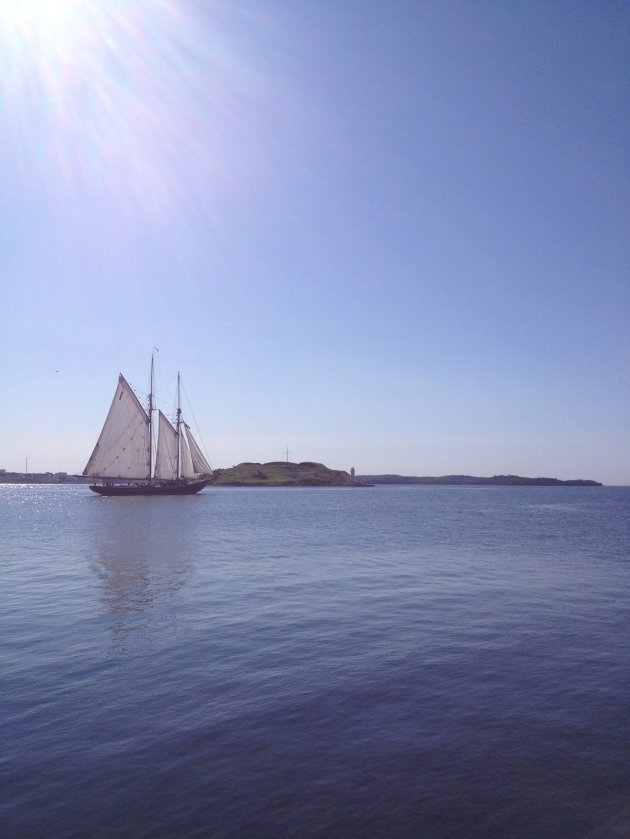 Georges Island, with McNabs Island in the distance

Charles’s ship HMS Indian underwent extensive repairs at the Halifax Naval Yard in the fall of 1809. The Naval Yard of the early nineteenth century has been replaced by a modern facility of the Royal Canadian Navy, but the Maritime Museum of the Atlantic has on display a detailed model of the Naval Yard as it was in 1813 during the Age of Sail.

Charles and his family stayed with Admiral and Lady Warren in their apartment in the Naval Hospital in the summer of 1810, several years before Admiralty House was built. Fanny wrote to her sister Esther that “Lady Warren and the Admiral are both extremely kind and attentive to me and are very fond of my little Cassy.” 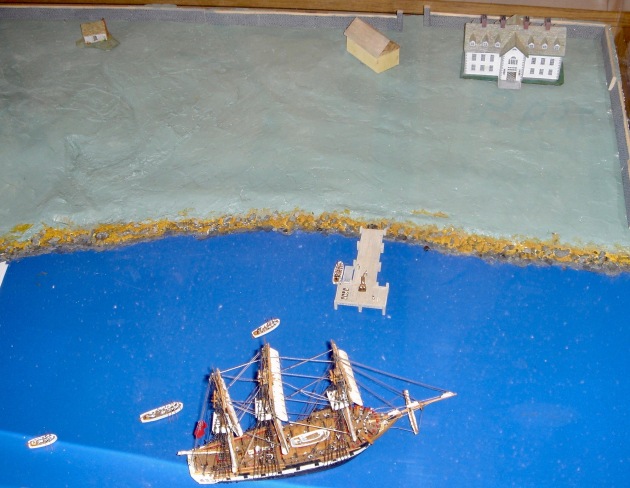 The Naval Hospital, in the northwest corner of the Naval Yard 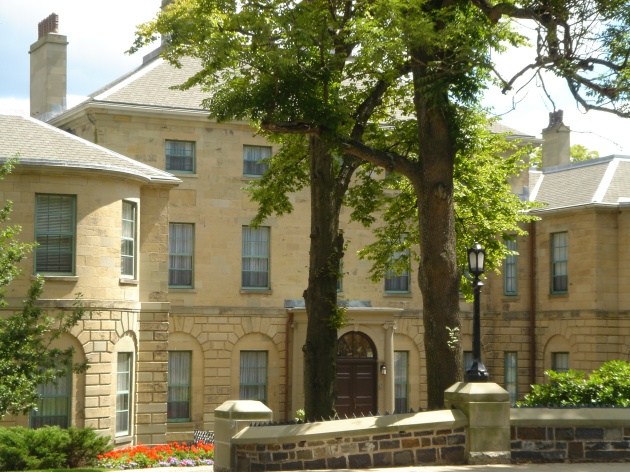 In June 1810, Fanny wrote that she and Charles attended a “splendid ball” at Government House, hosted by Lt. Governor Sir George Prevost and Lady Prevost. Many years later, Admiral Sir Francis Austen was received here during his term of office. Robert Field’s portrait of Andrew Belcher, Charles’s prize agent, hangs in the ballroom. 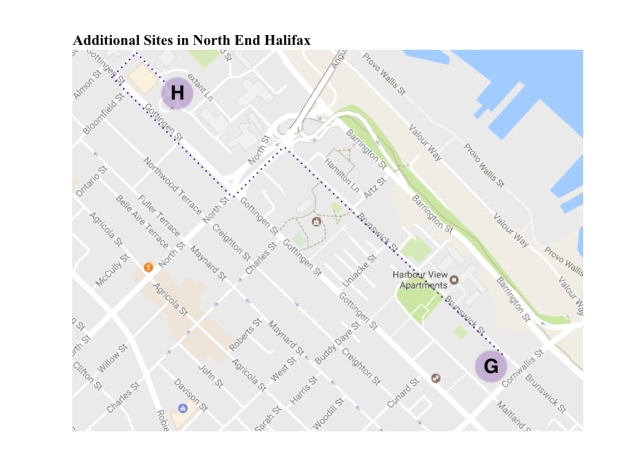 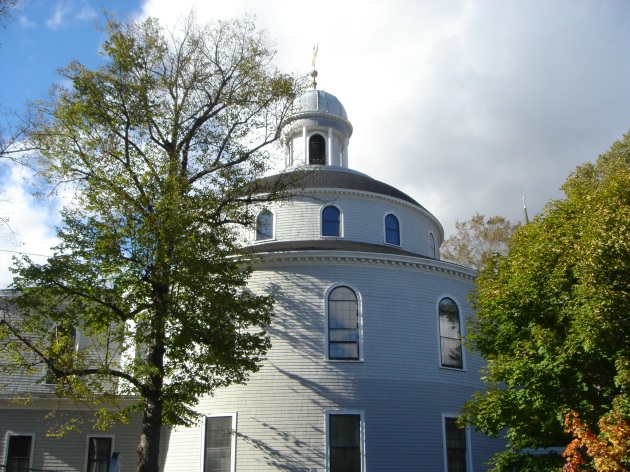 Admiral and Lady Warren sometimes attended services at St. George’s in the summer of 1810, and Charles and Fanny may well have accompanied them, although when Fanny mentions the church in a letter to her sister Esther, she says the Admiral and his wife have gone to the “round Church” and Captain Austen has gone to HMS Swiftsure to lead prayers, “but as I had a little head-ach I prefered staying at home and writing to you.”

Vice Admiral Sir Francis Austen lived in Admiralty House when he was in Halifax in the summers of 1845, 1846, and 1847 as Commander-in-Chief of the North American and West Indies Station. This two story stone mansion is a fine example of neoclassical Georgian architecture. On completion in 1819, it was considered one of Halifax’s most elegant dwellings with its mahogany woodwork, marble fireplaces, and plaster ceilings, many decorated with intricate detail. A major part of Admiralty House still retains its original configuration.

On his flagship, HMS Vindictive, Sir Francis Austen brought with him his sons George (chaplain) and Herbert Grey (flag lieutenant and amateur artist), his nephew Charles John Austen (flag lieutenant), and his daughters Cassandra and Frances. Jane Austen’s letters include a reference to “little Herbert,” to whom she “sent her love” when he was born in 1815. Charles John Junior, whose father Charles had first visited the city more than forty years previously, fell in love with a young woman from Halifax, Sophia Emma Deblois, and the two were married on 6 September 1848 at St. Paul’s.

HMS Vindictive: private collection; reproduced with permission of the owner.

Model of the Naval Dockyard in 1813: reproduced with permission from the Maritime Museum of the Atlantic; photo by Sarah Emsley.

All other photos are by Sarah Emsley.

Sheila Johnson Kindred has recently written a biography of Charles Austen’s wife Fanny, titled Jane Austen’s Transatlantic Sister: The Life and Letters of Fanny Palmer Austen. Through the use of all her extant letters, it traces the experiences of Fanny and her family during the Napoleonic Wars as well as her influence on Jane Austen’s fiction. The book will be published by McGill-Queen’s University Press in October 2017. 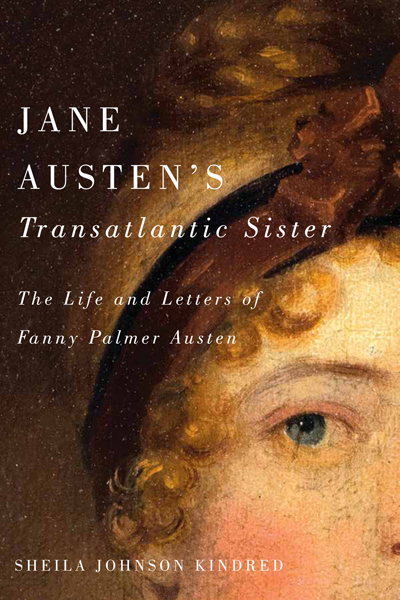 There are additional photos of Austen-related sites in Halifax in this blog post: “Austens in Bermuda and Nova Scotia.” Enter your email address on the blog, SarahEmsley.com, if you wish to subscribe. Future blog posts will include a Q&A with Sheila Johnson Kindred in the fall of 2017 about Jane Austen’s Transatlantic Sister, and, beginning in December 2017, a series of guest posts in honour of 200 years of Austen’s novels Northanger Abbey and Persuasion.